So, Christmas break is here and I need to master physics. Whether we are talking basic physics, advanced physics, or calculus-based physics you name it…I need it. Sometimes though, I just don’t want to sit and do calculations all day. Not when they concern random pulley systems and boring buoyant blocks.

I needed to apply it to something fun. A game maybe.

Appropriately, video games stuck out. I say appropriate because those beautifully rendered video games you know and love are steeped in layers and layers of physics. This mathematical language of the world that surrounds us is the fundamental foundation by which we can simulate a world within a computer. In essence without physics, we would be hard pressed in the entertainment venue.

So, being a Protoss player on my few days off, I decided Starcraft could provide me with a plethora of unique and challenging physics problems. If you are not up to speed feel free to click here for a video introducing the Protoss race.(Video introductions for Terran, and Zerg, can also be viewed.)

From the max velocity of a Zealot running at full gait, to the levitating force of a khaydarin Pylon, I have plenty to choose from. I also believe many students will agree that determining the downward force of a Mutalisk’s wings is far more interesting to calculate when compared to the frictional force on a square block sliding down a platform. Also, I feel like it may end up being a bit more challenging. 😀

So without further ado let me begin the first installment of Starcraft: Protoss Physics. If I get good feedback I will do more!

Zealots are the quintessential infantry unit for the Protoss. Now, Protoss have an average height of 3.0 meters. This was to be the means by which I measure in-game distance, using the 3.0 meter height

extrapolated over the distance traveled, so as to yield the in-game ratio I need to calculate the average speed. My hope was to measure the distance in relation to the Zealot, not to myself or the computer screen, and I was going to try and keep this going with all future calculations. In other words, If I was describing a distance or a force, it would be in relation to the unit on the battlefield.

Sadly, this was more difficult then I expected due to the in-game viewing angle.

Below is a slideshow of the experiment I ran. What I ended up doing was checking the height/shadow ratios (which comes pretty close to 3.0mm, with a scale of 1.0mm = 1.0m) and just measuring everything from a controlled screenshot.

All the measurements were done with a ruler (+/- 0.05mm), using screenshots at 200% zoom in Microsoft paint. The angle of the viewpoint , as stated, did not allow for even viewing of the unit but below you can see the measurements I took of the height and shadow length, as well as the zealot’s rather impressive gait of 3.0mm.

So running the experiment using a stop watch, I had the Zealot travel back and forth between the two Adepts marking the testing points. the Zealot traveled to directly where I clicked, and the clicking error worked out to be +/- 1.5mm. It is a large amount of error but by taking multiple trials I think we made up for it a bit. The distance traveled (D) was 32.5mm.

The data below is the ten trials I ran for the Zealot unit. The unit speed in-game was the upgraded speed of 2.75 (non-upgraded is 2.25). There are no units on the in-game speed which is given, though I am sure it correlates with the basic map squares. (If anyone knows more concerning unit speed and the mapping units feel free to comment or e-mail me!) 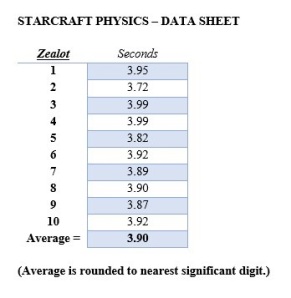 So, the average time it took for the zealot to travel the 32.5mm was 3.90 seconds. The average speed, which is a rate, was determined by dividing 32.5mm/3.8s = 8.34mm/s or 8.34m/s, via the unit scale. For those who don’t use metrics, this comes out to 18.7mph. The fastest human ever recorded, Usain Bolt, currently holds the record average speed of 10.4m/s or 23.4mph. So your little zealot is definitely booking it…but he probably won’t be winning any gold medals anytime soon.

If I want velocity, I merely must denote the direction the Zealot is traveling. For example, “The zealot was running East at 18.7mph.” Now we have a vector which takes into account direction, as well as distance and time.

Problem 2: Determination of a Adept and Shade Average Speed.

This problem is the same as the first in most ways, but involves a newer unit and one of it’s abilities. The Adept is a lightly armored ranged unit and has a special teleportation ability. They can create a shade which moves to a new area where the Adept will then teleport once a short time lapses.

The experiment outlined in the photo below is along the same guidelines as the Problem 1 experiment involving the Zealot unit. This time however, I took the difference of the two average speeds to illustrate how much faster the Adepts can travel, using the shade ability, versus the Zealot or their own normal travel means of hoofing it. 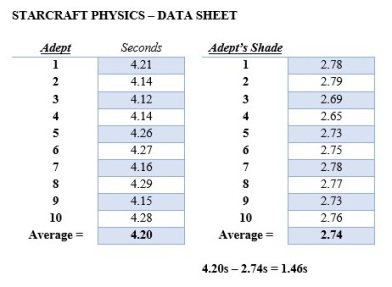 Disclaimers & Notes: all observations were done at game speed of normal. Measurements were taken in sets of 10 with the averages used for the calculations. All problems are worked so as to relate to the unit own perception on the battlefield. I did not propagate error you devils, get off my back! (Do comment though if you see an error in my maths, as always!)

Make sure you understand going in that there is a difference between velocity and speed. Speed is a scalar quantity, while velocity is a vector. One of them. velocity, keeps track of direction while the other deals only with distance and time. This is crucial to understand when you are just starting out.

Blizzard regularly updates and re-balances units. If a unit graphic no longer matches the in-game specs then they were most likely updated in a more recent patch.

_____The marvel cinematic timeline in all it’s glory, for those of you who enjoy the Marvel universe, but are a little behind on your shows!

One of the best RPG’s of all time.

Tired of dungeon raiding in Skyrim?

Wondering to yourself, “Why am I wasting my time running around looking for stuff and doing nothing? When I could literally be outside living real life doing the same thing?” When I am in the mood to play a game I want a GAME, not a mindless waste of my time. I want to think, I want something fresh and challenging. I want the fantastic, and sometimes, I want a story.

RPG’s can be good for this, except I feel there is an issue lately with RPG development…The world’s are unbalanced. Especially when it comes to map size to action ratios.

Now, don’t get me wrong, I like big world’s and lots of exploring, but I need to be intellectually challenged. I want to worry about my characters, I want a story! I want thrills! This game delivers, and the kicker? It is barely known and highly underrated, typically being overlooked in comparison to FF7 or DQ8. The gamer’s who’ve played Phantasy Star IV: The End of the Millenium

know, this is one of THE best games you could possibly play. Its long, has a fantastic story line, great characters, interesting skill sets, and a phenomenal soundtrack.

If you have a chance to get your hands on this game, whether it be through an original SEGA Genesis console, or a computer emulator (I recommend getting a SEGA controller with adapter if you do), then do not hesitate. I promise you will not be disappointed.

P.S. People love the soundtrack for this game so much that the fan community have taken it upon themselves to update many of the original songs.

Here is a nicely done version of “Laughter” from the fight with Zio. Enjoy.

Amazon links for Phantasy Star IV: The End of the Millenium [Download]

AND the Phantasy Star IV : The End of the Millennium (Offical Players Guide)