A STUDY ON THE ISOLATION & ANALYSIS OF NUCLEIC ACIDS

A Study on the Isolation & Analysis of Nucleic Acids

The quantitative analysis of nucleic acid samples can offer up insights into samples with unknown properties. In this brief study multiple techniques are utilized to isolate, quantify, and discern nucleic acid residues from Escherichia coli (E. coli) plasmids. Restriction digests and hyperchromic assays were also developed. Results for the restriction digest were not conclusive, but the hyperchromic effect was observed in both RNA and DNA as expected. The denaturant study with NaOH saw an interesting result, with RNA showing little change in spectroscopic absorbance, while DNA showed a drastic increase.

Quantification of nucleic acids can yield an abundance of data for samples where size and overall make-up are unknown. Nucleic acids can absorb UV light in set patterns allowing the use of UV fluorescence spectroscopy, which can then be used to determine concentrations of DNA/RNA which may be present in a solution. Additionally, use of this technique can aid in finding the purity of these macromolecules. This is important since reactions using DNA and RNA typically need certain concentrations to perform at an optimal level.

UV fluorescence spectroscopy is performed by exposing a sample in the instrument to ultraviolet light at 260nm. The amount of light which is able to pass through the sample is then measured by a photo-detector, which directly correlates with the concentration of nucleic acids in the sample. Beer’s Law may be utilized to form this correlation.

An absorbance must also be read at 280nm, so that protein contamination can be noted and factored out of the results. The 260nm/280nm ratio of absorbance may be used to assess sample purity. Contamination is a common occurrence upon isolation of nucleic acids from cellular structures. The absorbance of 280nm is used to detect the aromatic amino acids typically found throughout protein structures.

Restriction Digests can be used to help map the genetic makeup of DNA and RNA. Using Restriction endonucleases, proteins capable of binding to nucleic acids and severing the phosphodiester backbone, cuts can be made across single or double stranded nucleic acids at certain sites. These cats can be blunt or have sticky ends which aid in ligation processes.

These restricted portions, along with a known ladder and a non-restricted portion can be loaded into wells in an agarose gel. Once loaded they can be placed into a electrophoresis chamber which will have positive and negative nodes, thereby the DNA or RNA samples will begin migrating through the gel, attracted to the positive charge. Separation of the restricted portions will occur due to differences in size of each molecule, with the larger portions moving slowly through the gel matrix, while the smaller molecules navigate the gel matrix much faster. This separation makes it possible to find approximate base pair amounts in each restricted portion as it associates with the known ladder. These bands can be viewed by soaking the gel in a dye, such as ethidium bromide, allowing for viewing under UV light.

The hyperchromic effect is a notable increase in absorbance of a material, in this case DNA and RNA. This occurs in nucleic acids when denaturing of the DNA strands occurs. When separated, the UV absorption of a nucleic acid is increased. This can occur by multiple means such as heat, pH changes, and the addition of a denaturing material to the sample. This increase in absorbance is due to the nitrogenous bases becoming more open, so that they are able to absorb more light. Hydrophobic issues and hydrogen bonding between each base having been negated. This, the hyperchromic effect, is therefore more characteristic of DNA due to its double-stranded nature, but since RNA can have double stranded segments, it can display some of the absorbance increases attributed to hyperchromicity.

The procedure and materials used were in following with the published procedure (Collins, 2014).

Quantification of a DNA plasmid isolated from Escherichia coli (E. coli), using techniques outlined in the published procedure (Collins,2014) was performed. The electrophoresis procedure utilizing restriction digests showed the same band formations between the undigested and the digested lanes except for the EcoRI line which presented with the expected results.

EcoRI (Lane 2) showed a single band, with the H+E (Lane 3), B+E digest exhibiting 3 bands of varying length, and H+B (Lane 5) showing 4 bands. The ligation (Lane 7) showed 4 bands, and lastly the undigested sample (Lane 1) showed 4 bands. The approximate restriction sizes in number of base pairs are shown in Table 1 and was found using the standard curve from the Lambda-DNA (Lane 8). Approximate base pair numbers were calculated using relative mobility from distance of band/length of gel, for bands in known ladder.

The fluorescence standard curve was used to calculate the concentration of DNA in the sample, with the sample reading at 2.98895×10^6, which gives us around 11.0 mcg/mL of sample. The hyperchromic effect assays were plotted in Tables 2 and 3, along with percent changes between initial and final absorbance readings. 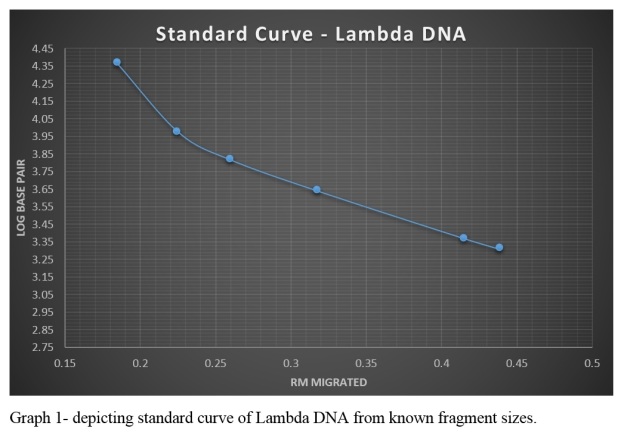 Positive proof for the restriction digest was not apparent when viewing the different bands in lanes 2-6. The undigested sample, along with five of the six digests showed identical faint double bands, 4.0-4.5 cm downrange of the wells. This is contrary to the hypothesis for the undigested sample, which showed one strong band and two faint bands and not a single heavily dyed band.

This possibly could be explained by super-coiling and breaking of some of the DNA plasmids during storage, isolation, and subsequent techniques. Other explanations are that these are from contamination of dye-able proteins. However, these exact bands are found in all the digests but not in the Eco RI Digest. This suggests that once the double strand is cut from a circle to a linear orientation, which would release any super-coiling, that these bands will no longer show up.

The overall make-up of the Bands in wells 1-6 were essentially the same, except for EcoRI, which showed a faint single band as expected. Therefore it is probable that the restriction enzymes did not digest the DNA properly. This is supported by the digestion samples resemblance to the undigested sample. However, the digest could have been read as successful if some of the fragments between each restriction site were small (<500bp) enough to enable those bands to exit the gel in the time it was ran. This could then be used to map the plasmid. A longer gel could allow for this to be observed and corrected for.

The ligation of the lambda DNA was successful. This can be seen in the condensed fragments that show to be much larger than their counterparts. Overall the ligation well ran fewer bands and had larger sized fragments just as expected. UV quantification and fluorescence readings gave concentrations of the DNA sample at approximately 11.0 mcg/mL.

DNA annealing occurs more readily under fast cooling conditions, allowing the increase in absorbance following the heat cycle to be negated some. This is not as noticeable in the slow cooling process. RNA however shows a large decrease after heating in both heating cycles, but the difference occurred in the cooling process. You can see a large increase after the fast cooling process, where in the slow cooling process this does not occur. Instead the change in hypochromicity is largely adhered to. This is possibly due to more base-pair bonding being formed between the single stranded structures during their cooling phases. This would have the opposite effect on absorbency, re-stacking the nitrogenous bases and forming new hydrogen bonds, thereby reducing their ability to absorb more UV light.

As expected neither DNA nor RNA showed that it would be feasible to return to their original structure and reform, thereby absorbing at their original readings. This is difficult for nucleic acids to do, which is one reason why in most procedures keeping things cold is of high priority. The difference seen between the quick-cooled versus the slow-cooled was as expected. This difference is due to the slow-cooling procedure not shocking the strands into quickly reforming, where the fast-cooling can catch them before they are too far apart, and can save some of the pairings. Therefore, though neither returned to their original absorbency readings, we do see that the fast-cooling procedure allows for a higher, though still not as high as the original, retaining of base-pairing following the addition of heat.

NaOH as a denaturant showed a slight drop in the RNA absorbance, a difference of -2.2% overall, where there was a large increase witnessed in DNA of 27.8%. NaCl showed the exact opposite effect, with a large increase in RNA hyperchromicity of 86.4%, and a -5.5% decrease in hyperchromicity for DNA. These effects are caused by the differences in the denaturants, with the hydroxide anion being able to deprotonate the DNA and RNA bases, which causes the DNA to denature, while NaCl neutralizes the nucleic acids backbones causing it to be less hydrophilic

Very little effect was observed upon the addition of RNase. It showed little variability in readings between DNA and RNA both. RNA showed the most reactivity, with an increase in hypochromicity of 1.5% for each reading taken. The effect was expected to be negligible on DNA, but to be larger on RNA. This could be due to lack of needed aqueous ions or poor buffering, leading to lack of enzyme activity in solution.