The Mars Curiosity Rover: The Thrill of Exploration

It has been 4 years since we touched down on Mars, and Curiosity continues to explore and learn about the martian surface.NASA, JPL, and their sister branches continually update us with beautifully rendered panoramas, high-res photos, and the always strange looking rock in the distance.

Once again, the Sol 1303 drive stopped during wheel steering, apparently due to another short in the RTG.  While the power and mobility engineers investigate the fault and ways to respond to them, another drive will be attempted on Sol 1305.  The remote science observations made on Sol 1303 went well, so only one ChemCam/Mastcam observation is planned before the Sol 1305 drive, of a rock with interesting surface texture dubbed “Katwitwi.”  Early on Sol 1306, Navcam, Mastcam and ChemCam will look for clouds and dust devils, and measure the amount of dust and various gasses in the atmosphere.  Later that sol, Mastcam will observe the Sun again and Navcam will acquire a panorama of the rover deck to look for changes in the distribution of dust and debris.  Overnight, CheMin will analyze and empty sample cell to improve instrument calibration.

This is a beautifully rendered panoramic of the mars curiosity rovers locale, using krpano programs. It is easy to move about and the detail is just splendid.Lately however, the feed has been a bit of a hassle, so I would use 360 cities feed at here, which looks to be doing a lot. Notice all the martian dust…that rover needs a bath! We are lucky we didn’t lose her with that broken wheel this past year. Curiosity’s continued mobility, data collection, and functionality is a true testament to the engineers behind the rovers construction.

Additionally, be sure to check out the Mars Exploration site.

Below is the view from the Mars Reconnaissance Orbiter (MRO), HiRISE showing the recently landed Mars Curiosity Rover (The two dots at the bottom left of the above image) sitting in a halo of blue saturating the planets surface around it. Part of the reason for the vibrant blue color is the color enhancements that the images were subjected to in order to emphasize ground features during photo analysis, but the sole cause of the discoloration is the rocket boosters on the powered crane responsible for lowering curiosity safely to the surface in one piece. The landing took place near Gale Crater as planned.

“We can clearly see Curiosity – it’s like two bright spots that we see, and their shadows. And then it’s surrounded by the blast pattern from the descent stage – those little blue fans right next to it (false colour blue),” explained NASA scientist Alfred McEwen.  Mr. McEwen is the principle investigator for MRO’s High Resolution Image Science Experiment (HiRISE) camera.

The men and women at NASA were all cheers as the spacecraft made its long awaited landing, delivering its cargo successfully as planned to the martian surface. After its 6 August 2012 (GMT) touchdown, engineers at NASA began immediately checking the rover’s systems, instruments, and upgrading the vehicle’s on-board software.

The rover itself comes up above an average adults hips, and is much larger then you would expect. It runs two computers, with the second acting as a back-up should anything go wrong with the first. The new upgraded software (R10) was developed to ensure optimal surface operations as well as enhanced driving capabilities. Key to these operations are its exciting drill and sample collection processes, in which it can test samples inside the rover chassis while communicating its findings with us here on Earth.

The end goal for its travels are located at the center of Gale crater, at the base of Mount Sharp, where there is interest in probing the sediments at the base of the mountain for organic compounds and liquid water.

You can check out the rover’s live twitter feed here!

Date: 26-Nov-2011, The Mars Science Laboratory (MSL) Launch and the Birth of Curiosity

People dream of space travel because we have explored so much of our home already. There is not much room for those of us who savvy ourselves as adventurers and explorers to go and explore. At most we have some random jungle areas, and the bottom of the oceans. IMO we need more options, and space would grant us an infinite amount.

Not everyone can become an astronaut for a variety of reasons, but that doesn’t mean we can’t one day travel in the void. Once the technology there and the costs begin to plummet then nothing will be holding us back. This is why non-profits like the Mars Society have garnered so much attention and funding. This is even more notable in the very serious and forward thinking way SpaceX has handled itself, continually working to advance our world through technology and privatize the space sector.

We can see some of this excitement in the faces of those cheering on as the Mars Science Laboratory (MSL), or Curiosity Rover, is launched from Cape Canaveral on November 26, 2011, at 15:02 UTC aboard the MSL spacecraft into space. The vehicle is on its way towards the red planet. The cargo a six-wheeled vehicle and special instruments, carrying years of planning, physical labor, cognitive strength, and human ingenuity with it.

Once it arrives at Mars it will decelerate and direct itself into orbit around the planet before beginning its landing process, envisioned in the conceptual video below of the computer modeled landing sequence. Media developed and hosted by the Jet Propulsion Laboratory at CalTech.

At Mars waiting for it and orbiting already, the High Resolution Imaging Science Experiment (HiRISE) is the most powerful camera ever sent to visit another planet. It is attached on-board NASA’s Mars Reconnaissance Orbiter (MRO)currently orbiting the red planet and it’s job is to observe the Martian surface at resolutions down to 25.0 cm/pixel, in three wavelengths as well as in stereo. It then relays these images back to Earth for the wonderful men and women associated with the Mar’s programs to study and in this way aids us in our mission to learn about our neighboring planet.

The Astrogeology Science Center (USGS) in Arizona participates in these daily operations involving HiRISE, as well as with the processing, distribution and archiving of the images and data they collect. The USGS posts pictures all the time and you can view the thousands of images at UAHiRISE.org. A majority of these images are enhanced color views. The HiRISE camera samples wavelengths of light that human eyes are unable to discern. Therefore the images are stretched to optimize color contrast. To the right you can see an example of the HiRISE’s work. The image depicts the Mars Exploration Rover Opportunity (denoted by the white arrow) as it travels along the southeast rim of Santa Maria crater. The USGS site gives the following data concerning the instrumentation: 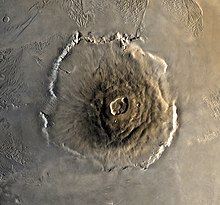 As with all things related to space, the Mar’s Rover thrills me. To imagine standing where it is and travelling across the face of our crimson neighbor. The rust colored sand churning in the wind, the grit and roughness of the dark brown rocks jutting up through the dunes. Imagine how humble one would feel standing in the shadow of Olympus Mons as it towers before us, engulfing us within it’s landscape as it soars to it’s 16 mile high summit, the tallest mountain in our solar system.

It may be hard to envision the mass that is this mountain, so to give you an idea think of the country France…You envisioning it?OK, good, now just go ahead and fill it up with dirt, about 13-14 miles of it and you essentially have Olympus Mons. Yeah.The picture shows this intimidating picture after having been snapped by the Viking 1 orbiter as it flew overhead. It gives a nice visual of its summit caldera, escarpment and aureole.